Technology is a word that describes
something that does not work yet…..
― Douglas Adams

After returning from Hannover Messe 2016, which was abuzz with Industry 4.0, I was showing some videos of the exhibition to my friend, who had missed out visiting the Fair this year. After watching them, he mentioned that it looked the same last year and in a couple of cases like the ones in 2013.

Has Industry 4.0 already arrived or is it being hijacked by organisations as a marketing hype, in a desperate effort to position their company’s offerings as “ahead of the game”?

What then really is, Industry 4.0?

In our view it is more of a vision and an overarching concept that connects digital solutions in the virtual or cyber domain with the operational or physical systems. It is the basis for the creation of an ecosystem connecting people, places and things in the industrial domain.

By using highly connected, embedded intelligent systems, products and machines will be able to exchange information autonomously, with processes, transportation and usage monitored and autonomously controlled online. The predicted result, apparently, will be hitherto unachievable operational efficiencies and production line and supply chain agility, and the creation of potentially valuable new service opportunities. This will create new business models by connecting individual consumer demand with a highly distributed network of supply.

As you can see from the following table, each of these technologies have been around for some time. 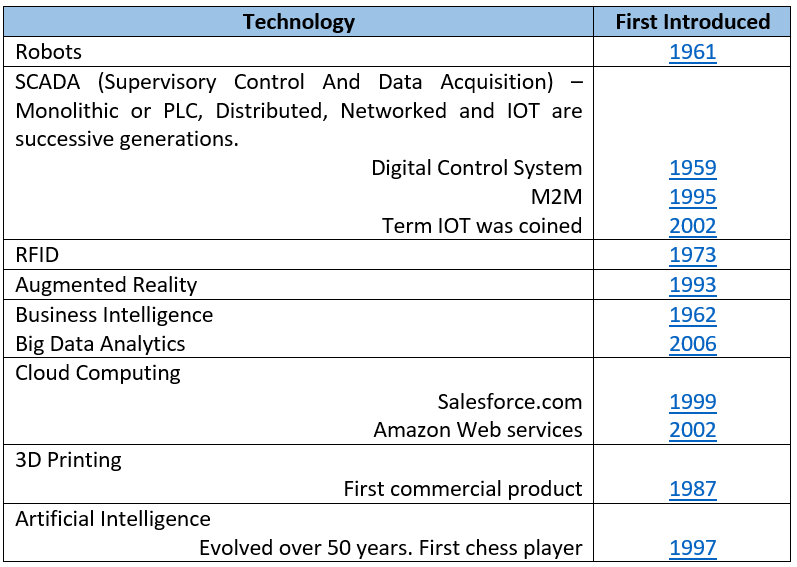 Why then are we not seeing the real world implementations?

A lot of hype has been built around Industry 4.0 both within the industry as well as in the mind of Public, over the last 3 years. While there is widespread positive expectation amongst the Industry leaders, partially influenced by aggressive marketing of product/service vendors, we are also seeing a some levels of teething problems due to some technology components.

You say I started out with practically nothing, but that isn’t correct.
We all start with all there is, it’s how we use it that makes things possible.
― Henry Ford

To understand this phenomenon let us go back in recent history. 7-8 years ago, before cell phones became “smart”, very few saw the need for our mobile devices to connect to the internet other than for the purpose of reading emails. Though some pieces like hardware, cellular technologies and software applications were available, the integration of these technologies created the Smart phone which operated on new Operating Systems like iOS and Android. This led to a revolution in business practices, annihilation of some dominant players (Nokia, Blackberry) , emergence of new players (Apple Google), and new models (Uber) that are essential part of our daily life with significant commercial value.

Industry 4.0 technologies are on a similar cusp of revolution. Many challenges inherent in integrating a number of technological principles like:

are being solved or are on the verge of commercialisation.

We are seeing lot of traction on many fronts with working prototypes and pilot plants already being demonstrated. Companies in the US and Germany are the furthest along in digitising internal operations and partnering across the horizontal value chain. China’s industrial companies stand out in terms of deployment of Robots. Japan has made some initial progress.

How can India be an early adapter of Industry 4.0?

Once a new technology rolls over you, if you are not
part of the steamroller, you are part of the road …
― Stewart Brand

In Crossing the Chasm, Geoffrey Moore postulates that a chasm in terms of expectations exists between the early adopters (enthusiasts and visionaries) of the product/technology and the early majority (the pragmatists). As far as Industry 4.0 is concerned, India can move to the position of an early majority by Pragmatic Innovation, a topic that will be elaborated in the future blogs.

Industry 4.0 brings a world of possibilities. If India has to adopt Industry 4.0, then what are the enabling factors? What are the hurdles? What’s the practical way forward? We will examine these issues in our forthcoming issue – Part 4 of the blog series.