China regained its Manufacturing eminence; Can India do the same?

Global economy always shows striking shifts, which keep redrawing the economic map of the world.
India and China who were once the leading economies in the world, lost their eminent position by 1800s – post Industrial Revolution in the west. Till 1800s, which was pre-dominantly an agrarian economy, population and arable land mass, more or less determined the strength of GDP. This got radically changed due to Industrial Revolution. Other factors of Production like Capital, Equipment, Raw material and access to Markets, became prominent.
If one looks at the chart (which is based on the pioneering study of Angus Maddison) shown below in closer detail, India has slipped very significantly, while China has done a great recovery act over the past four decades. To a large extent, the significant jump of China, had a lot to do with emphasis on Manufacturing and the reform process initiated during the 70s. 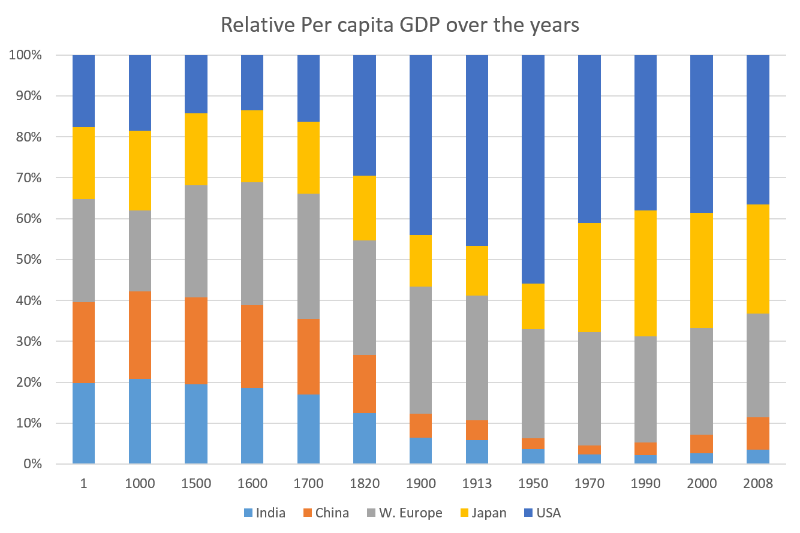 Can India repeat what China did, to regain its economic leadership?

To answer this, it is necessary to list some factors which have led to the low share of Indian GDP. Prior to independence, India lost out due to British colonial rule, World wars, and protectionism.

While China was reversing its fortunes from mid 1940s, India’s economy- in particular, the Manufacturing, continued to lose out, due to some bad choices in Governance. Listing a few reasons:

Post 2000, a newly emergent Services economy in India growing on its own steam, showed a dramatic increase, while Manufacturing with all its historic shackles continued to flounder. Although India has made some gains in few sectors like Pharma, Automobiles, Cement, Steel, Diamond cutting & polishing, and Satellite launching, it still needs to catch-up with the rest of the world.

Of course, quite a few enabling measures have been taken by the current Government and it has generated an optimism that India can make significant advancements in Manufacturing.

Given this situation, can India revolutionise its Manufacturing economy through Industry 4.0?

Before we delve into the answers, let us take a brief look at the evolution of the term “Industry 4.0”. Originally coined by the German Government, it has come to mean the fourth Industrial revolution.

The concept behind the name divides the history of industry into four phases:

On a lighter vein – one of my co-speakers on a panel, discussing “Indo-German Collaboration on Industry 4.0”, at the recently concluded Hannover Messe, commented – “the prior three revolutions were characterised by major upheavals in the society –in terms of nature of work, lifestyles and migration, while the 4.0 is more like an “unborn baby” who is expected to be a “superman” even before being born!”

In the next part of the blog we will elaborate on what is Industry 4.0.
– Is it just a Hype? Will it be a slow “evolution” or will it lead to a massive “revolution” disrupting lifestyles, and employment patterns?